There are about 200 hotels in Venice and, this being Italy, most of them are well run. A few may have become slatternly through over confidence induced by a non-stop flow of package tourists, but their principal handicap is age.
A medieval palace, religious institution or merchant's house cannot be converted into a modern hotel with identical bedrooms, although ruthless use of a steel joists has opened up many a spacious lobby behind a Renaissance facade. Thus the same hotel is likely to offer both large and lofty bedrooms commanding magnificent views and dark poky rooms overlooking a dank ventilation well or an alley. If a particular hotel is known to command fine views, suitable rooms can usually be reserved at an extra charge.

Lone travelers are particularly at risk since single rooms are the most cramped. One solution for those accustomed to traveling alone and staying in the more expensive hotels is to choose one that is less expensive and book a double room. Venice is remarkably quiet city but for light sleepers these is the hazard of church bells in the early morning and the hooters and bellowing diesels of barges on the wider canals.
HOTELS in Venice


For most visitors the chance of such disturbance is an acceptable risk. Now that the city is busy at Christmas and Easter and the February carnival has been reintroduced, there are fewer times of the year when it can seem empty. These currently are November, the first three weeks of December, January and March, when some hotels may close. The busiest months are July, August and September.
Most Venetian hotels now serve only breakfast and only the grandest offer a cooked breakfast. A number have good restaurants but, as a general rule, half board should be avoided because this nearly always involves the evening meal and so hampers the enjoyable exploration of the city's restaurants. The tourist information offices at Piazzale Roma, on the Tronchetto, at Santa Lucia railway station, Marco Polo airport and the Venice exit of the autostrada  at Marghera all operate a hotel booking service. If a room is found the 5 EUR deposit is deducted from your first night's bill.

There are dozens very imposing hotels in Venice, most of them, suitably, on the Grand Canal near San Marco.

Hotel Gabrielli Sandwirth is a former Gothic palazzo with its architectural splendours incorporated into its public rooms, courtyard and rose garden, but here, too single rooms can be cell-sized.

Hotel Luna, Calle dell'Ascensione San Marco 1234. Like the Bonvecchiati, this is a comfortable package holiday hotel in the higher price bracket. Its position near the Piazza San Marco is convenient for exploring the city.

The following are popular with regular visitors to Venice.

Hotel Accademia - This is a 17th century house in its own garden at the junction of two canals, just off the Canal Grande. Only breakfast is served (in the garden when warm. Although the hotel is no longer family owned, the management has improved. Its position remains idyllic, particularly when the wisteria is in bloom, and it is prudent to ask for a room overlooking the front or back garden as those above the canal at one side can be noisy with barges in the early morning.

Hotel Pausania  - San Barnaba, Dorsoduro 2824. This hotel is on a quiet canal where vegetables are sold  to housewife's direct from a moored bridge. It has recently been modernized but upper-floor bedrooms are reached by a steep stone Gothic staircase  in the courtyard.


The choice of pleasant accommodation for visitors on a low budget is limited, but there are some gems of pensioni with historical or literary associations or fine views to compensate for any lack of luxury.


Lido Hotels - Two gigantic relics of the heyday of the Lido are hotels designed for rich pre-1914 families. Both come alive during the Venice Film Festival, which is concentrated on the Lido, and both are as expensive as one would expect from their glamorous associations.

Among the tall trees just inland from the famous beach stands the Quattro Fontane ( Via Fontane 4/16), a comfortable, rambling house in an oddly alpine style with a modern wing. In summer, meals and drinks are served in the large garden, and a vaporetto stops near by at the Casino pier from lunchtime until 4. hours every half hour and takes passengers direct to San Marco.

Way to make a Travel 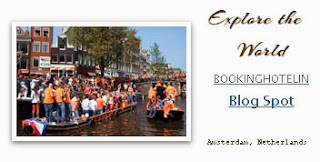